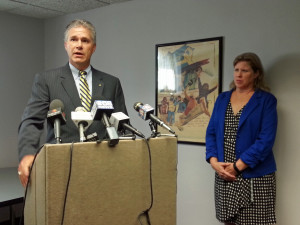 One in three teens is affected by dating violence, yet 81 percent of teens’ parents don’t believe it’s an issue, especially in the lives of their children. That’s according to Patti Seger, executive director of End Domestic Abuse Wisconsin. She says there are great consequences for failure to recognize and respond to teen dating violence. “Teens experience dating violence are more likely to engage in substance abuse, eating disorders and risky sexual behavior that could lead to teen pregnancy. The rate of suicide or suicide attempts increases dramatically.”

Seger says teens are reluctant to report abuse and seek help — and violence can follow teens into adulthood. That’s why it’s important to educate youth and teens early and often, she says. They want to gear their latest efforts to teens via text messaging — a favorite mode of communication among that age group.

Wisconsin Attorney General JB Van Hollen says Seger’s group and others like it do great work, but the government also needs to do more to educate and help prevent such violence. “Hopefully we can make schools and communities safer for them; hopefully we can prevent young people from being victimized and get into trouble and have their lives thrown off track; but hopefully along the way we can also prevent them from becoming adult abusers themselves.” 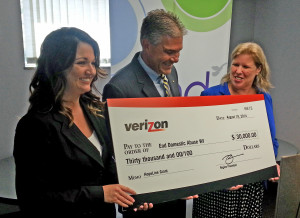 Verizon Wireless encourages everyone to donate their old wireless devices in any condition from any carrier to their HopeLine program. After getting those devices refurbished and recycled, the money generated is distributed to the community for the cause. The phone company presented a $30,000 grant to End Domestic Abuse Wisconsin to help provide support, education, and training.

Approximately 1.5 million high school age teens experience some form of physical violence from a dating partner each year, according to Amber Oldroyd, director of retail at Verizon Wireless.  The grant from Verizon will help End Domestic Abuse WI continue to develop its programs to serve teens in need.