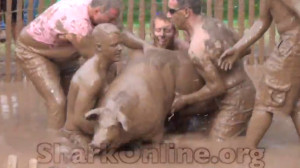 President and founder Steve Hindi says they found cruelty to animals, animal fighting and child neglect – specifically, juveniles encouraged to wallow in mud contaminated with animal feces and urine. Hindi says, under state law, spectators, organizers and participants could be charged with a misdemeanor or felony.

Hindi says they’re continuing to compile evidence from the video footage shot last weekend, and plans to issue that complaint sometime next week. He also walked with the media across the street from the Hawthorne Suites in Allouez to the Diocese of Green Bay chancery to try and meet with Bishop David Ricken.

Ricken wasn’t available, but communications director Justine Lodl did speak with Hindi and his camera person. Lodl didn’t speak with the media after the meeting, but did say, “We are going to review all of your materials and discuss this.”