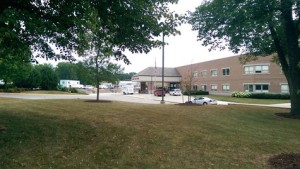 Fire investigators have determined that spontaneous combustion was the cause of last Friday’s morning fire that heavily damaged Green Bay Preble High School.

Green Bay Area Public School District employees, who were cleaning up from the resurfacing of the gym floor, improperly disposed of rags used to clean up a chemical. Green Bay Metro Fire Lt. Nick Craig says “they placed rags that were used to clean up some of the product that was used to resurface the floor, that product actually spontaneously combusted with those cotton rags and started the plastic garbage can that was placed next to the bleachers on fire.”

Craig reiterated that there was no intruder, and that the motion detectors were initially set off by the fires sometime around 1:20 a.m. Friday.

Officials were adamant that the fire was not set on purpose, but stopped short of calling it an accidental fire. “I can’t say…I mean if you’re saying was it done on purpose, I can guarantee that it was not done on purpose,” says Mike Stangel, director of facilities for the Green Bay Area Public School District.

Preble High School principal Natasha Rowell confirmed earlier reports that the damage to the school building is worse than they first thought, and that has led to the reality that the building will not be ready for the start of classes on September 2. “The district staff is already looking at different scenarios to make up the lost school and instructional time.”