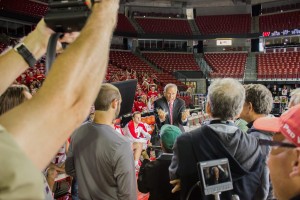 University of Wisconsin Badgers Mens Basketball Coach Bo Ryan is the latest celebrity to be featured in a state tourism ad.

Hollywood producers, directors, and Wisconsin natives David Zucker, Jerry Zucker, and Jim Abrahams — also known collectively as ZAZ — return to the Badger State to do their magic. Ryan says he’s a huge fan of the trio and their movies, including Airplane! and The Naked Gun. “I know with the direction of these three gentlemen here that they’ll figure out some way to make me look entertaining.”

The 13th Badgers Basketball coach — who took his team to the Final Four last year — will star in the 2015 summer tourism commercial.

Stephanie Klett is Wisconsin Department of Tourism secretary. “Coach Bo Ryan epitomizes Wisconsin at its best. What we love about him is that the whole state can claim him and we all feel that we have a certain kind of ownership in him.” Ryan was named champion of Coaches versus Cancer in 2013.

At a press event at the Kohl’s Center Wednesday, Ryan tells the crowd he feels “honored” to represent Wisconsin, a place he has called home since 1976.

Green Bay Packer Jordy Nelson and Milwaukee Buck Kareem Abdul-Jabbar were featured in previous tourism ads. Klett says Wisconsin tourism has increased 18 percent in the past three years. Total visitor spending last year was $17.5 billion.Few details were given about the ad, but Klett says Coach Ryan will be “in his element” coaching a game and getting a “little bit worked up.”

Filming began Wednesday at the Kohl Center and moved to locations in and around Wisconsin Dells.