You are here: Home / Crime / Courts / Courtney pleads not guilty to murder of Edgerton woman 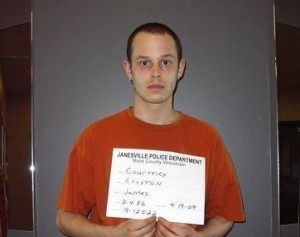 The 28-year-old is accused of bludgeoning 21-year-old Britney Cross of Edgerton to death near the Rock River in Janesville on May 4th, then going home and viciously attacking a roommate and attempting to set a fire.

Judge James Daley accepted a not guilty plea from Courtney’s attorney and ordered a trial by jury on seven counts, including homicide, attempted homicide, and attempted arson.

Courtney is due back in court October 9.