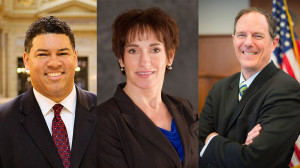 While all three offered similar positions on issues ranging from enforcing the state’s open meetings laws to repealing a state voter ID law, Happ offered a different take on criminalizing first offense drunk driving. Happ questioned whether the state should be looking to add another criminal charge on the books, “at a time that we’re talking about massive incarceration rates.”

Richards and Ozanne favor criminal penalties for first-time offenders, which Ozanne pointed out make up over half the injury-involved drunk driving crashes in the state.

In terms of priorities if they win the election, Ozanne wants to create a Division of Civil Rights in the Department of Justice, allowing the public to bring concerns directly to the agency for investigation. Happ cited a desire to more aggressively enforce laws protecting children from crimes carried out using the internet. Richards says he would conduct a “top to bottom review” of the DOJ, to make sure it’s fulfilling its duties to the people of Wisconsin.

Candidates also faced a number of individual questions from audience members attending the debate. When asked whether Wisconsin should join Colorado and Washington in legalizing recreational marijuana use, Richards cited concerns about the long term impacts of those laws. He said “I think the jury’s still out on that, and until we more clearly see what’s happening in those states, I think it’s a little too early for Wisconsin to go down that road.”

On gun control and efforts to combat gang violence, Ozanne cited the long tradition of firearms ownership in the state and the need for responsible gun ownership and training. “I am not here to take people’s guns. We are here to talk about what keeps our communities safe.”

The three candidates will face each other in an August 12 primary, with the winner going on to run against Republican Brad Schimel in November’s general election.