You are here: Home / Business / Dems call for ‘urgency’ on Kenosha casino negotiations 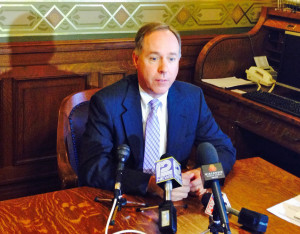 At the Capitol, Democrats are calling for stepped up action on the Kenosha casino proposal. With the Walker administration still negotiating with the Potawatomi and Menominee tribes over the latter’s proposal for an off-reservation casino at Kenosha, southeastern Wisconsin lawmakers including Kenosha Democrat, state Representative Peter Barca, are asking for urgency.

“I would think this would be priority number one,” Barca said during a press conference Wednesday in the Assembly parlor. “It just seems as though, given how long this has transpired . . . that we are lacking the urgency needed.”

“A year after the BIA approval, we’re still waiting for a million and a half-dollar study,” said state Senator Robert Wirch. “I think this can only be characterized as a failure of leadership by our governor.”

“We have an official study being done, that will verify whether thousands of jobs will be created, or thousands are going to be lost,” said Assembly Speaker Robin Vos, a Republican who favors the Menominee plan to build a Hard Rock casino complex at the site of the idled Dairyland greyhound park. “We’ll have an official study that says ‘this is whether the casino can succeed or whether it will fail,’ and what the costs will be to the state of Wisconsin under either scenario.”

Governor Scott Walker said on Tuesday that  an agreement has been reached with the Ho Chunk tribe to allow the Menominee project to advance, but that “significant challenges remain” with the Potawatomi.

“I guess I presumed that the Democrats would be having a press conference congratulating Governor Walker on the great work of getting the first part of the deal done,” said Vos. “It’s not about creating jobs in Kenosha and Racine, it’s all about creating a political story because they want to do whatever they can to defeat Governor Walker.”