You are here: Home / Packers / Expect more yellow flags to fly in NFL games this season 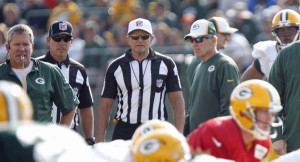 If Thursday’s training camp practice is any indication, we could see an increase in the number of penalties called by NFL officials this season.

NFL Referee Ed Hochuli and three members of his officiating crew took to the practice field on Thursday.  In a one-on-one drill between Green Bay Packers wide receivers and defensive backs, flags were flying on a regular basis.  In fact, Hochuli said, “I think we had 10 (penalties) out of the first 10 plays on the defensive backs in the receiver drill.”

The defensive players don’t like it.  If wide receivers push-off and the defenders aren’t allowed to push back, then we’ll witness a one-sided scenario.  Wide receivers will have a field day.

Hochuli said the players will adjust, and they’ll have to, because the guys in stripes will be watching.

“Grabbing the jersey or any other part of the receiver’s uniform is defensive holding and will be called regardless whether or not the official deems that the grab impeded or restricted the receiver,” said Hochuli.

What will be interesting to see is if this becomes a big emphasis in the preseason and then goes away in the regular season.  Hochuli says no, it’ll be called the same and the players will have to adjust.

Of course, if the offense gains a big advantage, that same advantage will help the Packers offense.  Aaron Rodgers and his receivers should be able to carve up opposing defenses around the league.

Hochuli likes to drag things on when communicating to the fans about penalties.  He was asked about it yesterday.

AUDIO: Ed Hochuli discusses his long explanations with a reporter :14

One noticeable change in terms of players celebrating after touchdowns, players will no longer be allowed to dunk the ball over the cross bar.

AUDIO: Ed Hochuli says there’ll be no more dunking the ball over the cross bar :19