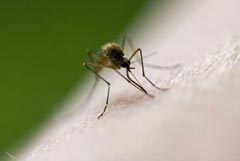 The state has recorded its first human case of West Nile virus for the year.

The mosquito-borne virus was found in an Ashland County resident, although state health officials are offering no details about the person or their current condition. State Division of Public Health epidemiologist Diep Hoang Johnson says it’s a critical reminder though that the virus still poses a threat in Wisconsin and that “this disease can effect anyone, in any age group.”

Last year, 21 Wisconsin residents were diagnosed with symptomatic infections and two patients died from complications related to the virus. Johnson believes the number of people who become ill is actually much higher, but the cases just go unreported unless the symptoms are serious. A West Nile infection can cause a person to develop a fever, headache, muscle and joint aches, nausea, vomiting, rash, and fatigue. Because of the flu-like nature, many people may contract the virus without even knowing what they have.