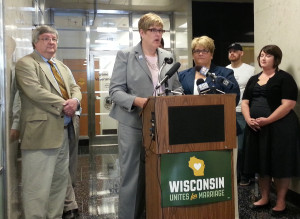 While recent public opinion polls have shown growing support for gay marriage, Katie Belanger with Fair Wisconsin believes far too many people in the state still show opposition when the issue comes up. That’s why her organization, along with the American Civil Liberties Union and plaintiffs in a federal lawsuit challenging Wisconsin’s ban, are forming a coalition aimed at educating the public about the issue.

Belanger says “we are not going to stop at 50, 55, 56 percent support. This is about creating a Wisconsin in which all people are treated with dignity and respect.”

A federal appeals court in Chicago is scheduled to hear arguments on August 26 in an appeal of federal Judge Barbara Crabb’s ruling that overturned Wisconsin’s constitutional amendment banning gay marriage. The ruling in June resulted in a flood of gay couples in the state getting married during a brief window, before Crabb ordered a halt to those licenses being issued while the decision is appealed.

The campaign, titled ‘Wisconsin Unites for Marriage,’ will use testimonials from same sex couples to help educate the public about the impact Wisconsin’s ban has on their lives and their rights as committed couples. Chris Amhuty with the ACLU of Wisconsin says it will give them a chance to share those stories with the rest of the state and ensure that “everyone has a voice in this historic movement.”

Judy Trampf and her partner Katy Heyning of Madison are plaintiffs in the case. Trampf says “I’ve lived most of my life in Wisconsin, and I know that the people of my state value liberty strongly and we value the rights of others to live as they see fit. I know that once we begin to discuss this issue publicly, we will have the overwhelming support of fellow Wisconsinites.”

Supporters of the ban maintain they will continue to defend it in court, arguing that the amendment adopted by voters in 2006 reflects the will of the people of Wisconsin.