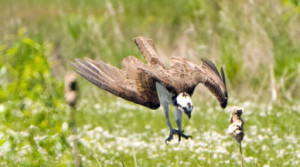 An adult osprey dives. (Photo: US Fish and Wildlife Service)

The lone surviving member of an osprey family in Bayfield County could be placed back in a nest in the wild.

Marge Gibson of the Raptor Education Group says the chick has been in their care since earlier this month. It was found after an adult male osprey was brought in with a gunshot wound in the wing. The mother was found a short distance from the nest, along with a chick that had been hit by a car after leaving the next in search of food. The chick currently being kept in rehab managed to land in the grass and was safely recovered.

The adult male osprey eventually had to be euthanized because of its injuries, but was reunited briefly with its chick before that happened.

As authorities continued their investigation, they found a barred owl that had also been shot. The adult female osprey was too badly decomposed to determine how it died.

Osprey are a federally protected species in Wisconsin and investigators with the U.S. Fish and Wildlife Service are looking for those responsible for shooting the birds.