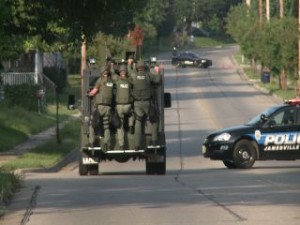 Janesville Police are investigating what they describe as a “swatting” incident on Sunday.

A 911 caller reported he had shot his mother and had his brother hostage, prompting a full-scale SWAT response. After establishing a perimeter around the home, and attempting to make contact with the caller, the Janesville SWAT team entered the duplex and found it empty. Police eventually made contact with the two subjects mentioned in the call and found they were unharmed.

Swatting is a trend hitting cities nationwide. It involves someone making up a situation to generate a SWAT response, as a prank. “It certainly isn’t funny. It’s putting our officers at risk, our citizens at risk,” said Janesville Deputy Police Chief John Olsen.

NBC15 in Madison acquired the 911 audio from Sunday’s incident. The caller told dispatch he had a rifle in his hand and was going to go shoot his brother.

Multiple agencies responded, limiting law enforcement resources. “Not only does it have a negative impact on the city, it also impacted the county that day. Any other calls for service, non-emergency, more routine calls, they stacked and citizens had to wait because we had to deal with this,” Olsen said.

Olsen didn’t know the exact cost for this hoax, but he said “it adds up” with the multiple officers who were called to respond.

Police are investigating who was behind the call. Anyone found making a false report like this can face felony charges. Olsen said “Whether they were mad at somebody making the phone call, or they thought it was funny, it’s serious and that’s how we handle it.”