You are here: Home / Packers / Lacy on Sports Illustrated cover 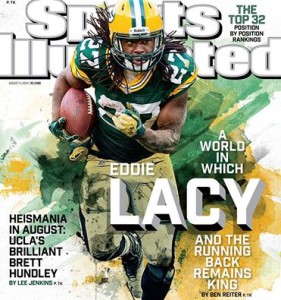 Green Bay Packers running back Eddie Lacy is on the cover of the latest issue of Sports Illustrated.  It’s deserving after his outstanding rookie season.  He’s picked up in the first week of training camp right where he left off last season.

Fans in attendance at training camp workouts have seen Lacy bust long runs.  And they’ve seen him working hard on his receiving skills, wanting to get more opportunities in the passing game this season.  Mike McCarthy is asking his players to be three-down backs and Lacy will need to catch balls out of the backfield to do that.

The Sports Illustrated story discusses the contrast between the value of running backs in fantasy football and the value placed on them by coaches and GM’s around the NFL.  It covers Lacy’s upbringing and what he’s doing with the money he’s earned so far in the NFL.

Lacy thinks the cover story is “pretty cool”.  What Green Bay fans think is cool is the fact that Lacy seems to have brought back the relevance of the running back in the NFL.