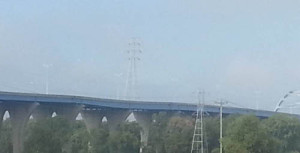 A new report from the state Department of Transportation shows the repairs to the Leo Frigo bridge in Green Bay last year cost $15 million.

Project manager Tom Buchholz says that’s less than their initial projection of $18-20 million. A segment of the bridge sagged, last year, when the supports for one of the piers buckled.

Bridge engineer Scott Becker says they’re going to continue with their regular maintenance for the bridge.

Project manager Tom Buchholz says they’re also going to monitor a number of piers that weren’t fortified during the project. He says some of the supports are starting to show some slight corrosion, but not to the point where officials would be concerned.