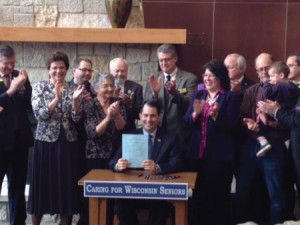 The state’s new Sliver Alert system is now up and running.

Wisconsin Crime Alert coordinator Joe Libowsky says it’s similar to the Amber Alert system many people are already aware of. Instead of children though, Silver Alerts are meant to inform the public about adults with Alzheimer’s and dementia who have gone missing.

The alerts will go out over email, cell phone text messages, fax to Crime Alert subscribers and broadcast media outlets. They can also be displayed on Department of Transportation digital highway signs, digital billboard, and lottery machines.

Libowsky says it’s estimated that 116,000 people in the state have dementia, and about 60 percent of those will wander at some point as their condition progresses.

Lawmakers ordered the creation of the system following an incident in June of last year. A Green Bay couple went missing for 24 hours after the woman, who was diagnosed with dementia, took a wrong turn on the way to visit family. Governor Scott Walker signed the legislation into law in April.