You are here: Home / Badgers / Nuttycombe to be inducted into Hall of Fame 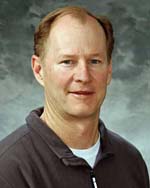 Nuttycombe will be honored with five others during 2014 USTFCCCA Hall of Fame ceremonies on Dec. 15 in Phoenix.

Ed Nuttycombe joins his father, Charles, in the USTFCCCA Coaches Hall of Fame, as Charles was inducted into the Hall of Fame in 2005 after coaching at Newport News and Menchville High Schools in Virginia from 1956-90.  Charles Nuttycombe led his teams to seven indoor track & field state championships and seven outdoor track & field state championships.  Charles coached Wisconsin legend Al Toon in high school before Ed coached him at Wisconsin.

Ed Nuttycombe served as the head men’s track and field coach at UW for 30 years before retiring last year.  He led the Badgers to 26 Big Ten track and field titles, 13 indoors and 13 outdoors.