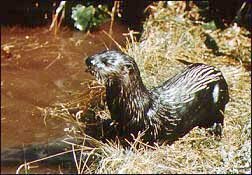 A recent otter attack in Wisconsin is a rare occurrence. They are more likely to avoid people than to attack them, but a 13-year-old Twin Cities girl was attacked by an otter on a Polk County lake over the weekend, sustaining bites, scratches and bruises.

“Usually when they go on the offensive like this it’s either because they are protecting young that are in the area, or they have some sort of food resource that they feel is in danger,” said DNR ecologist Jeriann Albers. Injury or illness can also be factors. The Minnesota girl is getting a precautionary series of rabies vaccinations, although Albers said otters rarely carry the disease.

An attempt may be made to trap and remove the otter from Bone Lake. “There’s probably several otter in there, and you won’t know for sure that you’re catching the otter that was involved,” said Albers. “But if the landowners are interested in getting a permit, we would likely issue them one, to try to get someone in there to remove the animal.”

This is the second recent otter attack in the U.S. Late last month near Seattle a woman and her 8-year-old grandson suffered serious injuries when they were attacked by an otter. Wildlife officials tracked down and killed that otter – a large male – on Sunday. “It’s still a pretty rare thing,” Albers said. The last such incident in Wisconsin was in 2009, and Albers isn’t aware of any before that. “It’s not something that occurs commonly.”