You are here: Home / Packers / Packers may be looking for tackle help 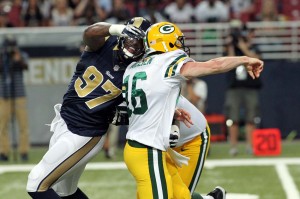 Derek Sherrod had put himself in front of the pack for the Green Bay Packers swing-tackle job after a solid performance in the preseason opener at Tennessee.  But Sherrod’s lack of speed was exposed in last Saturday’s 21-7 victory over the Rams in St. Louis.  That could leave the Packers looking for help.

Fellow tackle Aaron Adams struggled just as much, leaving the Packers with some concern about who would protect quarterback Aaron Rodgers if something were to happen to starters David Bahktiari or Bryan Bulaga.

The Packers went into training camp with veteran Don Barclay set as the top backup at tackle, but Barclay suffered a season-ending ACL tear.

As teams cut their rosters down over the next two weeks, don’t be surprised if the Packers aren’t keeping a close eye on the waiver wire, looking to strengthen their depth at tackle.