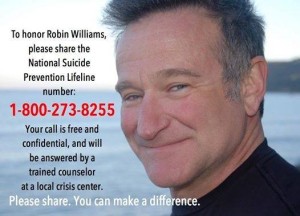 The death of comedian/actor Robin Williams brings attention to mental illness, especially in Wisconsin where suicides are much higher than homicides.

There are many different types of mental illness, explains Shel Gross, Director of Public Policy for Mental Health America of Wisconsin, ranging from mood disorders such as depression, anxiety, and bipolar disorder to thought disorders like schizophrenia.

Suicide remains a significant public health burden in Wisconsin, according to a new report recently released by the Wisconsin Department of Health Services (DHS), in partnership  with the Injury Research Center at the Medical College of Wisconsin (MCW) and Mental Health America of Wisconsin (MHA).

The report shows firearms were the most frequently used method to kill oneself in Wisconsin. Williams died by hanging.

During the course of the year, one in four people experience a condition that could be diagnosed as a mental illness — probably someone you know. Gross says some individuals might not acknowledge their mental disorder and simply shy away from treatment for fear of being stigmatized or discriminated against. “So when you have a coworker or a neighbor, maybe you’ve known for a while and you like and you say they’re a nice guy, and they disclose to you ‘Yeah, I’ve been dealing with depression for 15 years’ or ‘I have bipolar but it’s controlled well by medications,’ it sort of changes people’s attitudes about what it means to have a mental illness.”

Mental illness is real; it’s common; and it’s treatable. Sadly, Gross says, many people don’t reach out for treatment. Those who are treated, he says, live with their disorders just as someone would with diabetes and heart disease.

Anyone seeking help for oneself or a friend can call 1-800-273-TALK. Gross says many of the calls made in Wisconsin are answered in the state. PreventSuicideWi.org