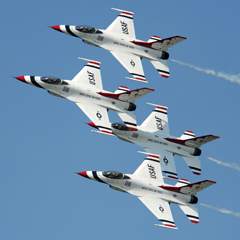 The return of a military flying team to the EAA AirVenture in Oshkosh last week helped boost attendance at the week-long airshow. Spokesman Dick Knapinski says the crowds were up 5.5 percent over last year, with more than 500,000 people coming through the gates.

The largest crowds were seen on Friday through Sunday, when the Air Force Thunderbirds performed. On both Saturday and Sunday, Knapinski says attendance was up 20 percent over last year. Overall, AirVenture saw visitors from 69 countries during the week.

It remains unclear whether the Thunderbirds will return for next year. Knapinski says “a jet team is always in the mix, but it’s not something that’s automatic.”