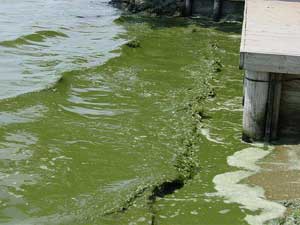 The recent drinking water crisis in the Toledo, Ohio metro area could well be a warning of what might occur in other cities around the Great Lakes, if serious efforts aren’t made to stem the flow of phosphorous into the lakes.

Alliance for the Great Lakes President Joel Brammeier said that while cities like Toledo and Milwaukee have made big strides in reducing sewage discharges into the Great Lakes, the same can’t be said for runoff, much of it from agriculture.

“We are getting a very loud alarm that it is time to get serious about controlling all sources of pollution, and as evidenced by the fact that people can’t drink their water, we haven’t been doing a very good job of that so far,” said Brammeier.

Toxic algae in Lake Erie is not a new phenomenon, but it wasn’t until last Friday, August 1st, that the problem became severe enough that residents were told not use their tap water. The ban impacted some 400,000 people in the city and surrounding suburbs, and was not lifted until Monday.

Scientists have been studying it, and environmentalists and politicians have been raising concerns, but Brammeier said not a lot has been done. “We’ve seen a number of half steps, and half measures that really haven’t gotten at the root sources of the problem,” he said. “We have vast quantities of phosphorous going into places like western Lake Erie coming from farm fields, and also coming out of some sewage treatment pipes.”

While Toledo residents are once again able to drink their tap water, another outbreak could happen – and Wisconsin is not necessarily immune. “We’re already seeing these kinds of toxic algal blooms and dead zones in Green Bay, so the problem is already on Wisconsin’s doorstep,” said Brammeier.

Brammeier said a comprehensive approach will be needed across the entire Great Lakes watershed – and it’s not just a question of public health. “This is not just about the sad reality that half a million people couldn’t drink their water for two days. This is about the reputation and image of the Great Lakes as a region.