You are here: Home / News / Walker offers reassurance on deficit 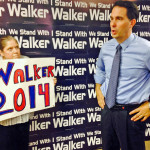 Governor Scott Walker said Friday that a state budget deficit – projected to be $215 million by mid-2015 – can be addressed. “I believe that just as there will be over a $400 million surplus in fiscal year ’14, we’ll finish the year with a balanced budget, and ideally a surpluses that we’ll then take and reinvest in the taxpayers,” Walker said.

The governor, during a campaign appearance in Madison, said there are “a number of things” that can be done, and he doesn’t want to dip into the state’s rainy day fund.

“We’ve not a number of things we’ll do, both on spending and to promote greater economic growth in the state,” Walker said. “The rainy day fund is a 165 times bigger than it was when we took office,” Walker said. “My goal is not to tap the rainy day fund as the primary source, but instead to look at expenditures and ways to increase revenues that are part of economic growth.”

Walker’s opponent, Democrat Mary Burke, said the news that tax collections fell short of projections by $251 million for the fiscal year that ended in June show that Walker has been “fiscally irresponsible.”