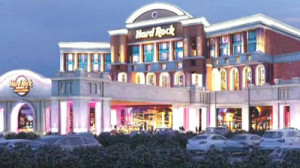 Governor Scott Walker has provided an update on negotiations over a Kenosha casino. A letter released Tuesday by the administration said there has been a deal reached with the Ho-Chunk Nation that could clear the way for the Menominee tribe to build an off-reservation casino. But “substantial challenges lie ahead” with the Forest County Potawatomi, according to a briefing forwarded to Walker by Secretary of the Department of Administration Mike Huebsch.

The Potawatomi also failed to make its annual revenue sharing payment of approximately $25 million. That was due on June 30, and according to Walker is “having a significant impact on the status of the state budget.”

The Menominee tribe is proposing an $800 million casino and hotel complex on the site of the closed Dairyland greyhound racetrack. The plan received the approval of the federal Bureau of Indian Affairs last year, but immediately drew opposition from the Ho-Chunk and Potawatomi tribes, operators of the state’s most profitable casinos. Walker has said the project would require the approval of the rest of Wisconsin’s tribes, and the federal government granted the state a six month extension – until February of 2105 – to approve or reject the casino-hotel complex. That’s well after the November election for governor between Walker and Democrat Mary Burke.

According to the briefing from Huebsch, the agreement with the Ho-Chunk followed a process spelled out under terms of a compact negotiated by the administration of former Governor Jim Doyle. It would decrease the Ho Chunk’s annual revenue sharing payment, based on the impact of a Menominee casino. In addition, the Ho Chunk “may be relieved of future revenue sharing payments a few years after a fully operational Kenosha casino opens,” and the state could be on the hook to compensate the tribe for additional losses.

Huebsch also said that it’s unclear how provisions of compacts negotiated by the Doyle administration with the Potawatomi will play out. “It appears the complicated provisions may have been designed to block a Kenosha casino,” he wrote. “It is possible the impact the of the Doyle compact provisions will not be known until early January.”

“According to the terms of the Forest County Potawatomi Community’s compact, the Tribe may get a reduction in, or refund of, the payments made to the State of Wisconsin should the State approve another casino within 50 miles of the Potawatomi Hotel & Casino in Milwaukee. The State may end up owing Potawatomi money should the Kenosha casino be approved. Consequently, Potawatomi put its 2014 state compact payment into a segregated / reserve account.”