Green Bay Packers Hall of Famer Bart Starr is in a Birmingham, Alabama, hospital recovering from a mild stroke. 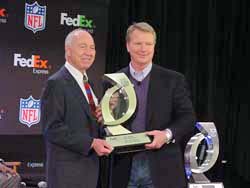 The family described Starr as “very functional” and “making progress every day.”  They believe he’ll make a full recovery.

Starr turned 80 years old in January but has maintained an active lifestyle.

“He is in the care of his physicians and therapists, and will be released as soon as he regains his strength,” the family said through a release.  “Bart’s doctors are confident for a full recovery.  We remain grateful for your love and concern.”

Starr won five NFL championships and the first two Super Bowls.  He won the NFL MVP award in 1966, he led the league in passing three times.