You are here: Home / Brewers / Brewers break out and beat the Reds 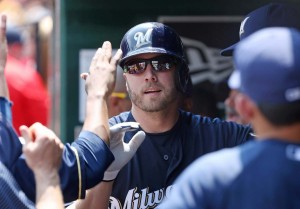 The Milwaukee Brewers banged out 15-hits and got home runs from rookie Matt Clark and Mark Reynolds in a 9-2 win over the Cincinnati Reds before another sold out crowd (41,870) at Miller Park on Sunday.

The win allowed the Brewers to stay a game and a half behind Pittsburgh in the race for the final National League Wildcard.  The nine runs were the most in a game since the Brewers beat the San Diego Padres 10-1 on August 25th at Petco Park.

The Brewers sent eleven hitters to the plate in the seventh.  Clark clubbed a three run homer to extend the 3-1 lead to 6-1.  Scooter Gennett also singled in a run and Ryan Braun drew a bases-loaded walk as the Brewers jumped in front 8-1.  It’s the third home run for Clark in as many starts since being called up from the minors earlier this month.

Mark Reynolds closed out the scoring with his first home run since Aug. 14.

The Brewers get the day off today, then start a three-city, nine-game road trip in St. Louis tomorrow night.  The trip also takes them to Pittsburgh and Cincinnati.