You are here: Home / Health / Medicine / Calls to domestic abuse hotline up 72 percent after Rice video 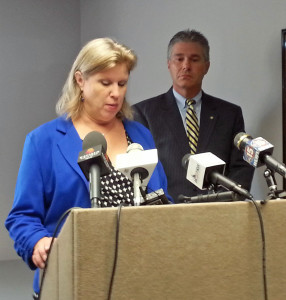 The dramatic 72 percent increase in phone calls to the National Domestic Violence Hotline comes after a video of former NFL player Ray Rice hitting his then-fiancée was made public.

Patti Seger is executive director of End Domestic Abuse Wisconsin. She says she’s not surprised by the surge in calls from victims of domestic violence as well as from their friends or family members. “The level of discourse that’s going on right now about domestic violence and the NFL related to the Ray Rice situation has been quite extraordinary, so it doesn’t surprise me that so many victims are coming forward.”

AUDIO: The silver lining is that this violent video is calling attention to domestic abuse. Seger says many women are realizing there is someone they can call, and she adds, it’s important not to blame the victim. Seger also points to a pattern of abuse among professional athletes. 1:53

That hotline normally receives 500 to 600 calls a day, according to a Huffington Post article. After the graphic video was circulated online and television Monday, more than 1,000 phone calls were answered. Katie Ray-Jones, the CEO of the hotline, tells the Huffington Post they had “an outpouring of women saying they didn’t realize this happened to other people.

Seger says that’s a common theme. She says violence in relationships is private matter. “When something like this situation really brings it out of the shadows — and really so explicitly that we see this video tape of him punching her and knocking her out and then dragging her across the floor — it really brings it home for women that they are truly not alone and that this can happen to anyone.”

Seger says there are many reasons why a victim stays with her abuser and, she says, people should not blame the victim.