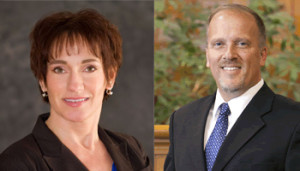 The two major candidates for Attorney General in Wisconsin will meet in at least one debate before the November 4th election.

Republican Brad Schimel and Democrat Susan Happ have agreed to both attend a debate that will be held on the evening of October 24th. The debate, which will air statewide on TV and radio, is sponsored by Wisconsin Public Radio and Television, and the Milwaukee Journal Sentinel.

Schimel is the Waukesha County district attorney, while Happ is the chief prosecutor in Jefferson County. The most recent Marquette University Law School poll shows the race between the two is a dead heat, although roughly 20 percent of registered voters still say they don’t know enough about either candidate to have an opinion about them.

The winner of the race replaces outgoing Republican Attorney General J.B. Van Hollen, who is stepping down after eight years in office.