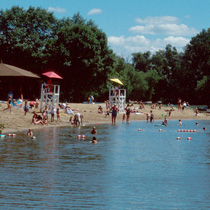 Madison Police are looking for the dog owner responsible for a fight that injured two lifeguards at a city beach over the weekend.

Police say a lifeguard at Vilas Park was injured Saturday afternoon after using pepper spray to stop an “unleashed and aggressive dog” after it charged at a small child on the beach. According to the incident report, the boy’s family snatched up the child before the dog could harm him. The 53-year-old lifeguard then told the animal’s owner to control the dog and leave immediately.

Dogs are not allowed on city beaches or at the park, even if they are on a leash. Police say the dog’s owner was aware of this fact and had run-ins with the same lifeguard in the past about the issue.

The dog’s owner became livid after being ordered off the beach, with him and the dog going after the guard. That prompted the lifeguard to use pepper spray, which stopped the dog in its tracks but only angered the owner. Police say the man slammed the guard into rakes hanging on a beach shelter, then punched and kicked him. Another lifeguard was hit in the hip with a rake while trying to defend her co-worker, while a third employee was able to pull the dog owner off the lifeguard and convinced him to leave the park.

The suspect is described as a white male, 29-35 years old, 5’11”, 160 pounds with dark scraggly hair and a goatee. He was last seen riding off on a bicycle with his dog keeping pace.