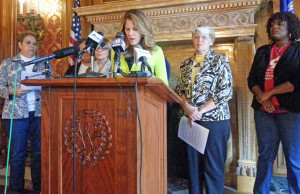 UPDATE: WMC has taken taken down the graphic in question from their website.*

A handful of Democrats criticize Wisconsin’s largest business group for its recent fundraising effort which includes a graphic on its website describing a pay-equity demonstrator as “anti-business.”

State Representative Chris Taylor (D-Madison) says the struggle continues for something that is so basic. She says, “If you do equal work you should get equal pay.”

AUDIO: Taylor says if women truly earned what they deserved, wages would go up and the state would generate more revenue. :47

Scott Manley with Wisconsin Manufacturers and Commerce criticized the group of female Democratic legislators, the liberal group One Wisconsin Now, and the women’s business group 9to5, suggesting their cause is not about equal pay for women. Instead, he says, it’s about enriching trial lawyers at the expense of Wisconsin employers.

Manley, who attended the press conference, defends the ad and calls Taylor’s accusations “shameful,” “unfounded,” and “absurd.” He says, “This is the kind of inflamed, political rhetoric that you hear from people when they don’t have the facts on their side.”

Enactment of Act 20 in the Doyle Administration broadened the ability to sue businesses for punitive damages in cases of workplace discrimination. WMC opposed that law, which was repealed in 2012 by the Walker Administration.

“It’s going to take more than scrubbing their website to make up for lobbying for the repeal of the Equal Pay Enforcement Act and spending millions of dollars to promote and protect the politicians that did their bidding like Gov. Scott Walker.

“A good place to start would be reprimanding their top lobbyist, who lashed out yesterday at supporters of equal pay with personal attacks and unfounded accusations.

“Even better would be to admit they are wrong to oppose laws to help ensure that men and women get paid the same for doing the same work and that hold bad actors accountable.”