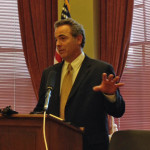 There’s some criticism for the governor’s drug testing plan. Governor Scott Walker’s proposal to require drug testing for adults getting unemployment and food stamps is drawing fire from at least one Democratic lawmaker.

“You really have to take a look at why that proposal would even be there,” said state Senator Jon Erpenbach of Middleton. “It might sound good to someone, until they lose a job and have to go urinate in a cup to get food stamps.”

Erpenbach believes the proposal would do nothing to create jobs and could end up costing the state money. “This is an expensive proposal in the name of job creation, which won’t create a single job. If you’re going to do this, how are you going to pay for it?”

If elected to a second term, Walker wants to require drug testing for childless adults requesting unemployment and food stamps. They’d also be required to participate in employment training or part-time work. “Our economy is hurting here in the state of Wisconsin, and the governor wants to drug test someone who’s just lost their job in order to get their food stamps,” Erpenbach said.