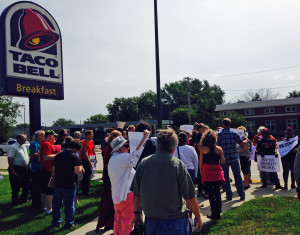 Fast food workers took to the streets in Thursday, as they seek $15 an hour. They say they’re struggling to get by. Motise Reynolds is a Popeyes employee in Madison. “I’m making about eight dollars. Twenty five cent raise when I came back the second time,” said Reynolds, balancing his toddler daughter on one hip as he stood outside a Taco Bell on East Washington Avenue.

“It ($15 an hour) would make a huge difference. We’re going check to check right now. It’s hard to make ends meet. We have bills, we have responsibilities, I have a second one in the way and I’m sure everybody has they’re own story.

Many fast food workers in Wisconsin and across the nation receive public assistance. “None of them want to be on public assitance,” said state Representative Melissa Sargent, a Madison Democrat. “They’re doing everything they can to get off of public assistance and save our goverment money by simply being paid a living wage.”

More than 100 protesters were arrested in cities across the nation including Chicago, New York and Milwaukee, where Congresswoman Gwen Moore was detained by police at a McDonald’s on Miller Park Way.