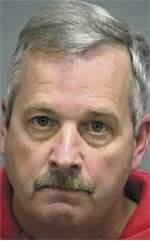 According to the Rock County Sheriff’s Office, who is investigating the incident, Sergeant Donohoue stopped by his home while on duty, and had some sort of altercation with his wife, who was in the process of moving out of the home.  Sheriff Spoden said at a news conference Thursday that Mrs. Donohoue had bruising to her right eye, which she claimed happened after Sergeant Donohoue struck her.

Sergeant Donohoue is in his 32nd year of service with the Janesville Police Department. He was placed on administrative leave Wednesday morning September 24th pending the outcome of the criminal investigation.

Donohoue was arrested after turning himself into the Rock County Sheriff’s Office, and he remains free on a $500 cash bond.Charges have yet to be filed.Listen to the news conference held Thursday at the Janesville Police Department.