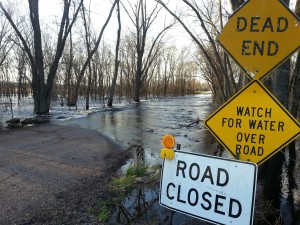 Flood waters from last week’s storms led to close calls for two kayakers and a horse in north central Wisconsin.

The Pine River was flowing quickly and dangerously with runoff from heavy storm rains. Lincoln County Sheriff’s Department deputies say a horse owner in the Town of Pine River was assisted on Friday afternoon after her horse was swept downstream in the swollen Pine River.

The woman told deputies that she was walking her horse across the river when it became spooked and ran into the river. The horse lost its footing and was last seen floating down the river on its side. About an hour later the horse owner found her horse on the south side of the river upset but healthy.

A short time later a caller reported two kayaks were floating upside down on the Pine River near the crossing at County Rd W. The department’s recreational deputy arrived and found two wet but safe occupants of the kayaks. One of the boaters had struck her head when they were ejected but she refused medical treatment.