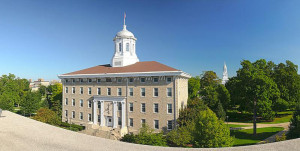 A $25 million donation to Lawrence University will provide scholarships to future students. President Mark Burstein says it’s the largest gift in university history, and it’s from an anonymous donor.

Burstein says the money will allow 45 to 50 students to receive some financial help every year, based on their needs. He says the university hopes to match the gift, by raising another $25 million over the next five years, for scholarships. The money will be placed in an endowment.

The previous record donation to Lawrence was $16 million. That money went to the Warch Campus Center project, in 2006.