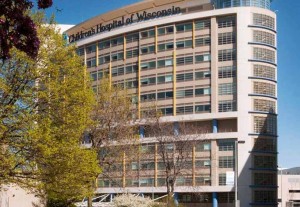 Investigators in Manitowoc have identified the woman accused of scalding her 5 year-old son as 31 year-old Ruthann Gneiser. On Monday, she allegedly “beat and scalded” her five-year-old son, who has down syndrome.

A probable cause affidavit shows that the Manitowoc County Sheriff’s Department received a call from Aurora Medical Center, stating the boy had been brought in with heavy bruising on his back and scald burns on nearly 50 percent of his body.

Gneiser told deputies that she “got as angry as I have ever been” and began to slap the boy repeatedly on his back with her open hand — so hard that he defecated in his pants. She then pulled her son into the bathroom and made him stand under the shower at the “coldest set” temperature until “he got himself cleaned up.”

Gneiser allegedly then turned on the hot water to the bathtub, where she believes her son sat under the water from one to one-and-a-half minutes. The affidavit states medical attention wasn’t sought until nearly three hours after the alleged incident.

The youngster was taken to Children’s Hospital in Milwaukee where he underwent surgery on Tuesday. Gneiser is free on $10,000 cash bail provided she have no contact with her son and no unsupervised contact with anyone under the age of 18. She’s due back in Manitowoc County Circuit Court next Monday afternoon for an initial appearance. WOMT, Brian Norton