You are here: Home / Crime / Courts / Merrill woman who drugged another goes to jail 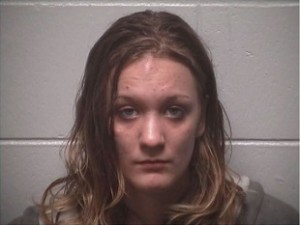 A Merrill woman is going to prison for injecting heroin into another person.

Kristine Woellner, 20, was sentenced to four years in prison, and then five more years on extended supervision. She was convicted in Lincoln County of injecting the drug into a woman, and leaving her in a gas station bathroom, unable to deal with an overdose of the drug last October. Woellner drove away in a friend’s vehicle.

Court records say a man and the victim drove to Michigan to pick Woellner up and bring her back to Wisconsin. The victim wasn’t feeling well, and allowed Woellner to inject the heroin in her leg. The next thing she recalled was waking up in a hospital.

Woellner was convicted of delivering heroin, recklessly endangering safety, possession of drug paraphernalia, and operating a vehicle without the owner’s consent.

This is not the first time Woellner has been in trouble. She was given probation in 2012 for intentionally blowing marijuana smoke in the face of a six-month-old baby.