You are here: Home / News / More allegations of plagiarism for Mary Burke 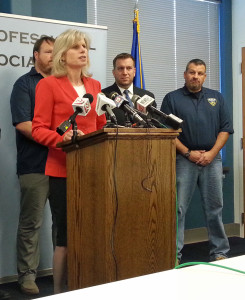 Democratic gubernatorial candidate Mary Burke responds to more accusations of plagiarism in her jobs plan and other initiatives. In her defense, Burke says she wants to bring the best ideas to Wisconsin and “I don’t care where they’re coming from.” She adds, “I’ll be clear about this. As governor, I am going to welcome ideas from other places — the best ideas, the best practices. That’s what we did at Trek Bicycle and that’s how we’re going to make sure Wisconsin has a thriving economy.”

Burke dismissed three new instances of copying, as reported by BuzzFeed, saying her consultant duplicated his own words from other plans he worked on; but if she were to use someone else’s words, she’d certainly give proper attribution. Burke maintains she didn’t violate her principles. “No; not at all. This is, again, a case of … when you put together economic development plans, this is about bringing in the best ideas.”

Joe Fadness with the state Republican Party says, “Mary Burke needs a lesson in business ethics because even 8th graders know that you shouldn’t copy the work of others.”

AUDIO: Repeating her stance on using the best ideas for Wisconsin — no matter where they come from — Burke explains the meaning of ‘plagiarism’ when asked by a reporter. :16