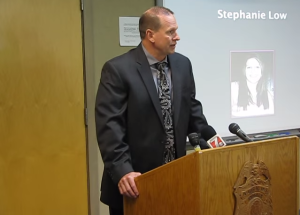 Murder case solved. The mystery of what happened to Stephanie Low has been answered, and her body has been found.

Wausau Police Chief Jeff Hardel confirmed that their top person of interest Kristopher Torgerson let them to the body of the woman he buried nearly four years ago. “On Friday September 19th, 2014, detectives traveled to the Wabeno area with Torgerson, and Torgerson located the gravesite where Stephanie’s body was eventually located.”

Torgerson was already in prison for battery and methamphetamine charges. Hardel says Torgerson was confronted at the Boscobel prison by detectives Bill Kolb and Jen Holz, who laid out the case they had against him, with or without Stephanie Low’s body. “Torgerson viewed an interview of one of our key associates or witnesses describing their involvement and Torgerson’s confession to them of his involvement. Torgerson then agreed to show detectives where Stephanie’s body is buried.”

The body was found Friday, September 19th at about 12:30 p.m., and was exhumed from the two foot deep grave at about 12:30 a.m. Saturday. An autopsy was performed in Madison, confirming Low’s identity.

Hardel says the Marathon County District Attorney’s office will not be in charge of prosecuting Torgerson for Low’s murder. “The State Attorney General’s office will be filing a criminal complaint against Kristopher Torgerson for the murder of Stephanie Low in the near future.”

Wausau Police Chief Jeff Hardel gave the timeline of the investigation during a Monday press conference. Afterwards, he said it took a while, but they always believed this case would be solved. “I’ve been involved in certain, in some high-profile investigations that we felt, well, we just don’t know. I didn’t have the confidence level that we could come to a conclusion in that particular case. This one, all of us felt this has a lot of solvability factors. We’ve got to press the right buttons.”

Hardel said there were over 500 leads, and over 100 people interviewed during the investigation… some of them multiple times. He said some of their stories matched, and others contradicted each other. The Chief said they knew once they got the right piece of information, they could solve the case. “We knew that there was certain players in this case, that if we were able to have the right leverage and the right angle, that we might be able to get the information.”

Six different witnesses told police that Torgerson confessed to killing Low. One of the witnesses that unwillingly helped crack the case was a woman police say changed her story. “February 2013, Detectives approach a close associate of Torgerson with evidence of her inconsistent testimony from previous interviews, and new evidence of her possible involvement in Stephanie’s disappearance. This associate then admits that Torgerson confessed to her that he killed Stephanie, and Torgerson asked her to lead him to the Wabeno area so he could bury Stephanie’s body.”

Another witness was a man the woman said helped Torgerson carry Stephanie’s body out of her Thomas Street apartment, and take her to the national forest to bury her. That man moved to California soon after Stephanie’s disappearance. “Detectives traveled to Long Beach and located this witness with the help of Long Beach Police Department. This male confessed to assisting Torgerson in removing Stephanie’s body from the apartment and traveling with Torgerson to the Wabeno area, and watching Torgerson bury her body.”

It will be up the the Attorney General’s office to determine what, if any, charges are filed against the man and woman for their involvement in the crime.

The family of Stephanie Low will be having a memorial balloon release at Oak Island Park October 10th, which is the fourth anniversary of her disappearance.