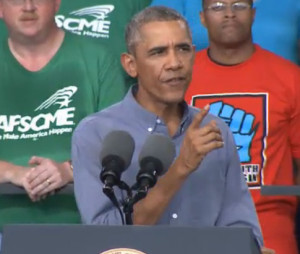 President Barack Obama was greeted by an enthusiastic crowd of supporters Monday, as he took the stage at Milwaukee’s LaborFest to deliver a Labor Day message about the state of the economy and ongoing efforts to raise the minimum wage.

During his roughly 30 minute speech, Obama touted continued economic growth, citing figures that the nation has added over 10 million jobs in the last 4.5 years, with businesses adding over 200,000 jobs for each of the past six months alone. He pointed to rising exports, along with increases in manufacturing and construction jobs, as evidence that things continue to improve in the nation. Obama said “by almost every measure, the American economy and American workers are better off than when I took office.”

The president also directed a great deal of criticism at Republicans in Congress, accusing them of trying to block much of his agenda.

In particular, he made the argument that “America deserves a raise” in the form of a minimum wage increase, an issue Obama has been focusing a great deal of attention on in recent months. “I’m not asking for the moon,” Obama said, “I just want a good deal for American workers.”

Despite a growing national movement to increase the federal minimum wage, there’s been little movement in Washington because of Republican opposition. However, President Obama assured those in the crowd that he was not giving up on the issue, arguing that persistence will be an essential part of the effort succeeding. He said “the only thing more powerful than an idea whose time has come, is when millions of people are organizing around an idea whose time has come.”

LaborFest officials say about 6,000 people attended Monday’s speech in Milwaukee. While she canceled plans to appear on stage at the event, Democratic candidate for governor Mary Burke did meet privately with Obama before his speech. Governor Scott Walker, along with Milwaukee Mayor Tom Barrett, greeted the president after Air Force One touched down in Milwaukee.