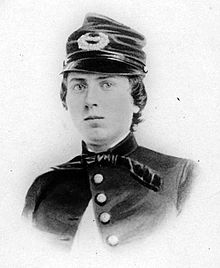 President Obama will bestow the nation’s highest military honor this afternoon to a Wisconsin Union Army officer who died in the Civil War. A ceremony will be held to present the Medal-of-Honor to descendants of Lieutenant Alonzo Cushing of Delafield — plus two others who served in Vietnam.

Cushing died while standing his ground under artillery fire and assaults from nearly 13,000 advancing Confederate soldiers in the Battle of Gettysburg. After being wounded in the stomach and shoulder, Cushing insisted on ordering his guns to the front lines — and he was later shot and killed. The White House said his actions made it possible for the Union Army to rebuff the Confederate assault.

Descendants and Civil War buffs lobbied for over 30 years to award Cushing the Medal-of-Honor, even though it must normally be presented within three years of an act of heroism. Congress eventually granted an exception to the policy.