You are here: Home / Packers / Packers get good news on injuries 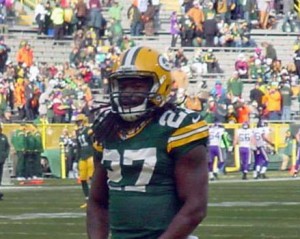 One day after the 36-16 loss to the Seattle Seahawks, the Green Bay Packers learned that their two injured starters, right tackle Bryan Bulaga and running back Eddie Lacy, shouldn’t miss extended time.

ESPN reported that Bulaga suffered a sprain to his medial collateral ligament in his left knee, the same knee that required ACL surgery last summer.  Packers coach Mike McCarthy said Bulaga wants to return quickly and practice on Wednesday, but the Packers medical staff wants to be cautious.

If Bulaga is forced to miss time, don’t expect the Packers to go elsewhere for a replacement.  McCarthy made it clear on Friday that Derek Sherrod, who allowed a pair of sacks in the Seattle game, would be the starter at right tackle.

AUDIO: Mike McCarthy is confident Derek Sherrod will perform better if called on this week :19

Lacy suffered a concussion near the end of Thursday’s loss.  It’s the second concussion of Lacy’s young career.  He missed a game last season after suffering his first concussion.

If Lacy isn’t cleared in time to face the Jets a week from Sunday, James Starks (37 yds on 7 carries) would get the start.