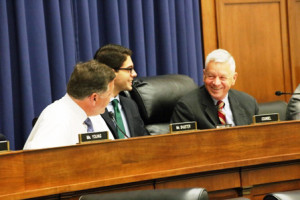 As he nears retirement, Wisconsin Congressman Tom Petri (R-WI) is receiving praise for his years of service on the House Transportation Committee.

Petri chairs the Highways and Transit Subcommittee, which held what will likely be its last meeting of the year on Tuesday. Transportation and Infrastructure Committee Chairman Bill Schuster (R-PA), a Republican from Pennsylvania, told the crowded room he’s gone to Petri for advice over the years. Schuster described Petri as “a great leader in transportation” and thanked him for a job well done.

Ranking Democratic Member Eleanor Holmes Norton (D-DC) said they are losing someone with a lot of knowledge, calling it “sad day for Wisconsin, and surely it is a sad day for the Congress of the United States.” Norton described Petri as a “fountain of knowledge” that takes many years to accumulate.

Petri has served on the committee since 1983, after starting in Congress in 1979. He decided not to seek reelection to Wisconsin’s 6th Congressional District earlier this year.