You are here: Home / News / Remembering 9-11 in Wisconsin 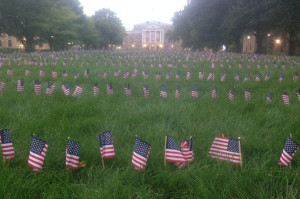 The nation paused this morning to remember the tragic events of the September 11th terrorist attacks, with several observances going on in Wisconsin to honor the victims of the attacks 13 years later.

On the UW-Madison campus, 2,977 small American flags were placed on Bascom Hill, symbolizing those killed after terrorist-hijacked airplanes crashed in to the World Trade Center, the Pentagon, and a farm field in Pennsylvania. The flags were placed by the College Republicans of UW-Madison, along with College Democrats and the Vets for Vets organization.

In a statement, College Republicans Chairman Charlie Hoffmann said “On this solemn day let us never forget the men and women who lost their lives at the World Trade Center, the Pentagon, and on flight United 93. This year’s freshmen class has little to no memory of this fateful day and as time passes memorials such as this become more and more important.”
Most incoming college freshmen were in kindergarten when the attacks occurred.

Governor Scott Walker and other leaders were at a ceremony this morning at the Milwaukee County War Memorial Center. During a stop in Racine on Wednesday, the governor said he does believe the nation is a safer place than it was 13 years ago and that there’s a hope that no one has forgotten the tragic lessons learned on that day.