You are here: Home / Crime / Courts / Representative Nygren’s daughter busted for drug use 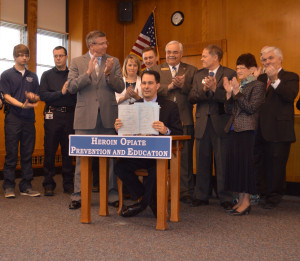 Cassandra Nygren, 25, was one of three people arrested at a home in Green Bay. Police said they found prescription pills and substances “consistent with heroin.”

Nygren had been an advocate for recovering heroin addicts since she was released from prison several months ago.

Representative John Nygren had seven bills approved earlier this year that seek to battle Wisconsin’s growing heroin abuse. Nygren shared his daughter’s story when he proposed the legislation, and his daughter joined him at some of the public events. She became addicted again after being clean for a year, Nygren says, and he was not surprised by his daughter’s arrest. He says heroin is a very powerful drug, and those who push it lie, cheat, and manipulate.

Cassandra Nygren appeared in Brown County Circuit Court Monday on felony charges of manufacturing and possessing narcotics, and a misdemeanor count of illegally obtaining prescription drugs. She was held on a $5,000 bond. Her initial proceeding is scheduled to resume October 10th.