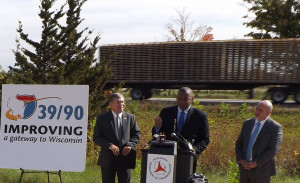 The U.S. Secretary of Transportation says a highway project in southern Wisconsin could be among many that are delayed when federal transportation funding runs out in about seven months.

Secretary Anthony Foxx was at a rest stop Wednesday just outside of Janesville, along where a $950 million expansion of Interstate 39/90 is slated to begin next year. He said “the highway expansion you are working on here will take seven years to build, but the federal funding for all transportation will run out in about seven months. Congress’ funding bill will expire next May, right at the start of construction season.”

Foxx says updating the county’s aging infrastructure is not a partisan issue, and Congress needs to act now. “Without a long term bill, that not only boosts transportation but provides the important policy changes that will help us streamline projects and move our country forward, projects like this one could be delayed or possibly not even completed.”