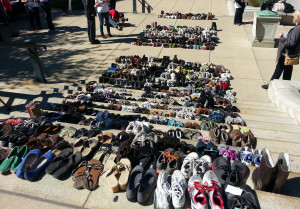 There were 467 pairs of empty shoes lining the stairs outside the state Capitol building Monday – each pair representing a life taken in Wisconsin by a gun in an average year.

Jeri Bonavia with the Wisconsin Anti-Violence Effort, or WAVE, says it should serve as a call to action for the people of the state. She told a crowd of supporters “one death from gun violence is too many…467 is a crisis that demands meaningful and decisive actions.”

WAVE is traveling the state this week to display those empty pairs of shoes in several communities. Bonavia said they are calling on gun owners to safeguard their weapons, and for politicians to pass laws that can help reduce gun violence. “Most urgently, we need background checks on all gun sales. The fact that we have not passed that law, even though there is evidence that proves it will save lives, is shameful.”

Bonavia argues the people of the state need to show they are willing to hold politicians accountable if meaningful gun reforms are not passed soon.

The “Hearts and Soles Tour” will be in Eau Claire and Wausau on Tuesday, Appleton on Wednesday, and Milwaukee on Friday.