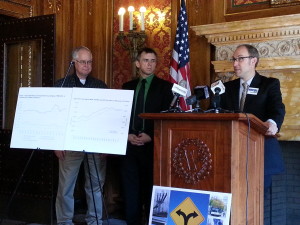 Unnecessarily expanding Wisconsin highways would waste billions of dollars that could better be spent on road repairs, according to a new report.

Wisconsin’s transportation priorities are backward, says Wisconsin Public Interest Research Group (WISPIRG) Director Bruce Speight, noting there’s a common sense way to reform transportation spending in Wisconsin. “WISPIRG is advocating for cutting wasteful highway spending and reprioritizing. Right now we’re really asking the wrong question: ‘How do we get more money?’ when the question really should be ‘What are our most urgent priorities and how are we meeting them?'”

As state policymakers discuss transportation funding and prioritize development, the new WISPIRG report shows the state is slated to spend nearly $3 billion on four “unneeded” highway expansion projects, while local transportation infrastructure is in disrepair. Speight says just one-third of that money would be needed for local road repair, transit, bicycle and pedestrian infrastructure, and the rehabilitation of state-owned roads — for the next 10 years. The group wants officials to cut wasteful highway spending and to reprioritize where funds are spent. Speight says local transportation needs are being neglected at a time when those needs are increasing and folks are driving less.

The group wants officials to cut wasteful highway spending and to reprioritize where funds are spent. Speight says local transportation needs are being neglected at a time when those needs are increasing and individuals are driving less. “Putting more money into the transportation fund at this time would be like putting water in a leaky bucket. Until we fix the problem — in this case that is reducing wasteful highway spending — we’ll continue to spend more on projects we don’t need.”

AUDIO: WISPIRG wants officials to cut wasteful highway spending and to reprioritize where funds are spent.  :16

The American Society of Civil Engineers rates 71 percent of Wisconsin’s roads as “mediocre” or “poor” quality, according to the report. Additionally, 1,157 bridges in Wisconsin — approximately 8 percent of the total — are “structurally deficient.”

Chuck Kamp, Metro Transit General Manager, says “Madison’s transit ridership has grown by 50 percent over the past 15 years from 10 million to 15 million rides, and the demand for expanded transit services continues to grow.”