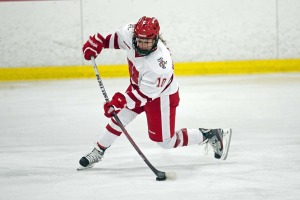 The 2nd-ranked Wisconsin Badger women’s hockey team pulled out a two-game sweep of the Ohio State Buckeyes on Sunday, pulling out a 3-0 win in the final game of the series at LaBahn Arena.

Senior Brittany Ammerman tallied two goals in the game, giving her five goals in the first six games of the season.

Sophomore Ann-Renee Desbiens record her second-straight shutout, stopping all 18 shots she faced to move to 4-0-0 on the season.

The Badgers finished 4 for 11 on the power play in two games this weekend, putting the team at 8 for 29 this season, nearly a 30% success rate.  The Badgers also killed off five penalties in the game, making them a perfect 28 for 28 on the season.

After the weekend shutout, Wisconsin is outscoring its opponents 30-4 and leads the nation in scoring offense, averaging five goals a game.

The Badgers host No. 1 Minnesota at 7pm on Friday in the first meeting of the year between the two Border Battle rivals.