You are here: Home / Badgers / Badgers fall from top 25 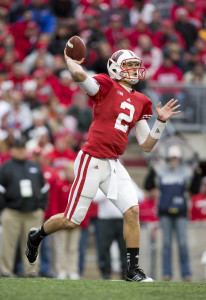 Stave finished 8 of 19 and tossed a 19-yard touchdown pass to Kenzel Doe with 4-minutes and 14-seconds left in the first half.  McEvoy was ineffective through four series, finishing 4 of 10 passing for 24 yards, which is why Wisconsin coach Gary Andersen made the quarterback switch.

The Badgers finished 2 for 5 in the red zone.

The Badgers played their worst defensive game of the season, missing several tackles throughout.  Northwestern freshman tailback Justin Jackson came into the game averaging 4.2 yards per carry and 58.8 yards per game, rolled up 162 yards (4.9 average) on the Badgers.

The Badgers joined Illinois as the only two teams in the Big Ten’s West Division without a Big Ten victory.  They’ll face one another this Saturday at Camp Randall (11am).  The Wildcats, who started the season 0-2, has won three straight games and improved to 2-0 in the Big Ten.

Now one wonders what Gary Andersen’s plan is for his quarterbacks moving forward?  Andersen said after the game that he is open to using both quarterbacks.

The Badgers haven’t won in Evanston since 1999.

When the Badgers face Illinois on Saturday, they’ll do so without their starting quarterback, Wes Lunt.  He suffered a fractured fibula in a 38-27 home loss to Purdue.  Lunt is scheduled to miss four to six weeks.

Reilly O’Toole replaced Lunt on Saturday.  O’Toole in six games this season has completed 30 of 57 passes for 428 yards, with four interceptions and one touchdown.