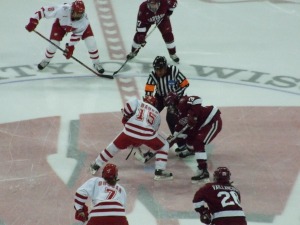 For the first time since the 2011-12 season, the Wisconsin women’s hockey team checked in at No. 1 in the USCHO.Com Division 1 Women’s Hockey Poll.

Their appearance at the top of the poll  is the Badgers’ first since March 5, 2012.

This week also marks the first time since March 5, 2012 that any team other than Minnesota has taken the number one spot in an in-season poll, as Clarkson was ranked No. 1 after winning the 2014 NCAA title against the Gophers in Hamden, Connecticut.

Minnesota dropped out of the top spot after scoring two goals in the final 12 minutes of the third period to force a 3-3 tie with Minnesota-Duluth last Saturday.

The Badgers and Gophers meet on Friday at 7pm at LaBahn Arena before wrapping up their series at 3 p.m. on Saturday.